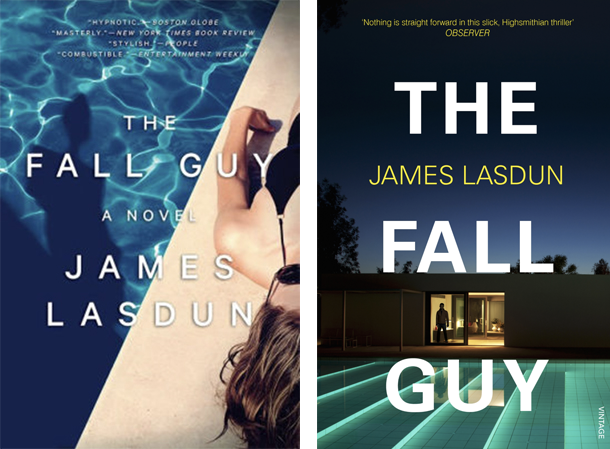 ‘You could not go wrong with James Lasdun’s The Fall Guy, a riveting psychological thriller’ —Lionel Shriver, Guardian Books of the Year.

In this taut psychological thriller, a couple and their houseguest find themselves caught in a deadly web of secrets, obsession, and revenge.

It is summer, 2012. Charlie, a wealthy banker with an uneasy conscience, invites his troubled cousin Matthew to visit him and his wife in their idyllic mountaintop house. As the days grow hotter, the friendship between the three begins to reveal its fault lines, and with the arrival of a fourth character, the household finds itself suddenly in the grip of uncontrollable passions. As readers of James Lasdun’s acclaimed fiction can expect, The Fall Guy is a complex moral tale as well as a gripping suspense story, probing questions of guilt and betrayal with ruthless incisiveness. Who is the real victim here? Who is the perpetrator? And who, ultimately, is the fall guy? Darkly vivid, with an atmosphere of erotic danger, The Fall Guy is Lasdun’s most entertaining novel yet.

A Book of the Month Club Selection

An Indie Next Great Read

“engaging, effortlessly readable… Lasdun’s writing style is clean and straightforward. All the complexity resides in character and detail. This is masterfully controlled 2am noir.”  —Lionel Shriver, The Financial Times

“Already drawing comparisons to “Gone Girl’’ and “The Girl on the Train’’ — but more aptly described as the literary descendant of Dostoyevsky and Patricia Highsmith in an alluring contemporary setting — “The Fall Guy’’ is a twisty, chilly, exquisitely written, and tautly suspenseful exploration of big ideas in the guise of a psychological thriller….As compared to “The Horned Man,’’ “The Fall Guy’s’’ greater accessibility allows it a different quality of power. Less allusive and technically daring, it is perhaps more compelling as story: neater, more aesthetically self-possessed, more diabolically resolved. Let us hope that readers caught up by its narrative drive will stay to admire the many other wonders of this particular labyrinth. —The Boston Globe

“Expertly playing the noir card, Lasdun dissects the mercurial relationships among a wealthy financier, his photographer wife and an aimless cousin during a long hot summer in upstate New York. There are plenty of lies and betrayals in this stylish thriller, but it’s the slow burn of obsession that makes it sing.” —People

“The suspense is gradually ramped up as an idyllic vacation morphs into a psychological thriller that really is – forgive the cliché – impossible to put down.” —Daily Mail

“This is a one-sitting read, a white-water ride to hell…harrowing…brilliant…”  —Frances Wilson, The Oldie

“With its deftly constructed narratives of guilt and buried resentment,The Fall Guy is more accessible than Lasdun’s previous novels….watching Matthew, Charlie and Chloe lure one another into a trap not quite of their own making has a certain shivery fascination… you think of Highsmith or Hitchcock.” —The Guardian

“A fascinating protagonist… I have to admit that I was still rooting for him, right up to the final page. His blithe confidence, a response to anger, shame and selfish arrogance, is infectious. We all wish we could erase, obscure, or even simply accept the past. Perhaps the message of The Fall Guy is that, however extreme our mistakes, we will still regard them as aberrations, bizarre swerves away from our true selves, rather than what they really are: the purest expressions of our prejudices, fears and desires.” —J. Robert Lennon, The London Review of Books

“nothing is straightforward in this slick, Highsmithian thriller, and while the damaged Matthew’s capacity for self-deception is flagged early, Lasdun’s skill lies not least in letting us think that we might therefore have his number. Wrong – and yet the novel’s denouement feels fated even as it smoothly steals the breath.” —The Observer (UK)

“James Lasdun has written an elegantly suspenseful novel set in a brilliantly realized affluent upstate New York community not unlike Woodstock―his characters are achingly real, and the self-deceptions that drive them so insightfully depicted, we might almost mistake them for our own. Truly a ‘page-turner’―propelled toward just the right ending.” — Joyce Carol Oates

“In The Fall Guy, James Lasdun brings the signature gifts to contemporary noir that he’s displayed in other literary venues–wit, style, an attractive gravitas. And the tale itself is sharp, acute in its observations, and absorbing. It’s a rich read.” —Norman Rush

“What a sinister and searching novel this is–and what a delight. James Lasdun is one of our great writers.” —Joseph O’Neill

“At the start of this terrific novel of suspense from Lasdun (Seven Lies), Matthew, an unemployed chef, and his cousin Charlie, a successful Wall Streeter, drive from New York City to Charlie’s vacation house in the Catskills. Charlie has invited Matthew, who’s almost like a brother, to spend the summer with him and his wife, Chloe. Matthew believes that the summer will be restorative, but the pastoral retreat is anything but as the gap in social status between him and Charlie becomes more pronounced. The tension rises when Matthew, essentially a private chef for the couple, begins to suspect Chloe of infidelity. The verboten topics of class and money hover over this literate tale of love, jealousy, and revenge. As one character notes, money is “inextricably linked to the one source of guilt and shame… the sense that you’ve stolen another person’s labor.” An undercurrent of menace and threat finally erupts, and Lasdun presents the inexorable turnings of fate in a subtle and disconcerting way.” —Publishers Weekly (starred review)